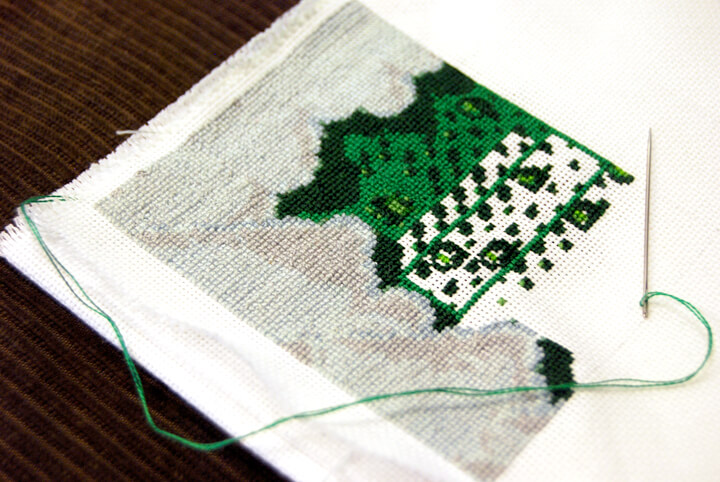 So, this was supposed to be a surprise for Shaun. But since I broke down and told him all about it last Friday so I could work on it at home, I figured I could share it on here too! I feel like an insane person for deciding to do this… This cross stitch pattern is no joke! I’ve been working on it during lunch breaks for the past month and I only got about halfway through the first page of the TWELVE page pattern. Which is why I decided to just ruin the surprise, so I could get it done faster. (I did most of that Lost Woods section this past weekend.)

I suppose I might explain myself a little for those of you who have no idea what you are looking at. It’s the Hyrule Light World map from the Super Nintendo game “The Legend of Zelda: A Link to the Past”.

The pattern itself is pretty ridiculous. I’ve used 14 different colors of floss so far, but it totally doesn’t look like it. Have you seen the movie Brave? Remember how the mom was working on that tapestry for years and years? Yeah that’s me, only my “tapestry” isn’t some family portrait thing – it’s a map from a video game. Yeah. I’m a dork, I know.

BUT IT’S A SUPER AWESOME MAP AND IT’S GOING TO BE SO COOL WHEN IT’S FINALLY DONE!

I’m a little too excited about it… When I post another progress shot in 2 years and I’m still working my way through Death Mountain we’ll see if I’m as excited.