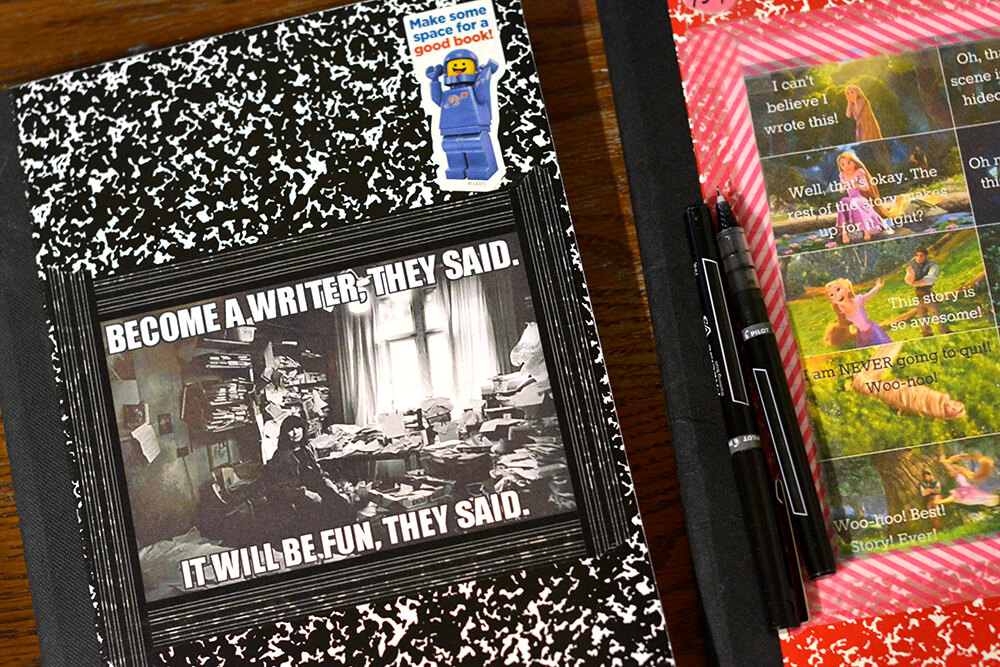 I had a very productive first day. I taped a writing meme to my new notebook. (Because tradition.) And then I wrote 1,342 words that are complete nonsense. Like, normally I feel like my writing is complete nonsense, but this is LITERALLY complete nonsense. And probably about 65% spelled wrong. I attempted to do something called the “Fifty Headed Hydra“, where you write 500 words in 5 minutes. I tried a few times, but the closest I got was 300. I’m super determined to actually make it to 500 someday though. Consider it officially added to my bucket list.

Just for fun, I’ve decided to share my “best” attempt with you. And you had better feel lucky, because I think this is the first time I’ve ever publicly shared anything I’ve written. Try not to be filled with too much astonsment.

Seriously though. Tnereintianing ??? I think my fingers had a seizure while I was writing this. Enjoy!

I knew they were discussing omportant things because it was rafer for my father to incelite all of hte novels to one place suchas this. but all I could hear was rambling nosense as I looked out ove the rilling sills that drifted away from my in all directions. The castel could be scene in the distance. And I wondered how long it would be intiul I was able to return to my room, away from all of this politcal nnsense. I longed to be alb ett o leave the castle, but this was not exaclty was I had in mind. I longed to be able to rowam freely, without lal of these regal ment suffocating my personal space.

I watched as teh clouds drifted across the bright vlue sky and wonderfed how fun it would be if a rain dicedd o to come at that moment. I twaooul dbe so tnereintianing to wach as everyone ean beack to catle to acoid being wt.

Suddenlty somehting dark moved acrpss my vision. A bird? A dragon perhjaps? A dragon would certainly make this afternoon more tneterinina. Probably not as funny as a rain storm and soaked nobels, but at least most exzteing.

But it wasn’t a bitrd. or a dran. It was something entirely diffetently and much more intriguing.

a flying machine. almost looked likea birtd, but it was sharp where it would have been smooth and it’s movenmet was not as nathurel. Ignoreing the staires, I stood from my seat and walkjed to the edge of the balcony, leaning out as far as I could to catch a beter glumpse of the mahine. my mouth agape with astonsment.

I cought a glumpse of a man insde.