Disclaimer: I might be the only one who thinks this is funny. 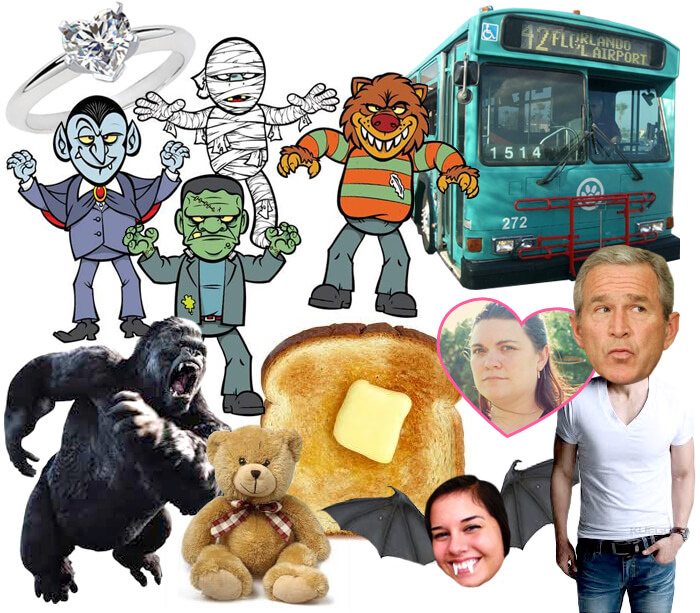 So you are probably looking at that image thinking, “What the what??!” Let me explain.

The other night I was looking through an old journal, from when Shaun and I were engaged. About a month before our wedding I had a crazy dream, which I documented in great detail. I read it to Shaun the other night and I was crying from laughing so hard. I REMEMBER dreaming this! I can still picture the looks on everyone’s faces during the toast scene. Gah, so funny! Here it is in all it’s glory:

“I dreamed that I was living back home but we had moved into this really big house. There was this guy I was engaged to but he wasn’t Shaun, and then I was engaged to this really weird woman, and there was this other guy who wanted to date me too so there was all kinds of weirdness going on with all that. THEN I was in my bedroom sitting on my bed and I could hear this loud yelling and crashing noise off in the distance, and then a Lynx bus came speeding into the room and the driver was trying to get people into the bus so they could run to safety. But this ton of evil monster people, like vampires and stuff, started attacking everyone. They were being led by King Kong, who was screaming “Kill them all!” So I escaped and ran upstairs to warn everyone about what was happening outside. But I guess the upstairs was soundproof because you couldn’t even hear any of the craziness downstairs, so everyone in the room just looked at me like I was crazy when I ran into the room screaming about everyone being attacked by giant gorillas… After quite an awkward silence, a piece of toast came out of the oven and started floating across the room, and everyone just watched it. Then it killed someone and Frankenstein popped out of a stuffed animal and bit off this guy’s head. I ran outside just in time to see Melody fly off with a bunch of vampires. Then Heather walked up and she was in charge of all the insanity so I was trying to convince her not to be evil when George W. Bush walked up onto the porch. He looked really good in this tight fitting t-shirt and I guess him and my sister had a thing going, which was a bit creepy. And then he took his shirt off and he was a fat old ugly man and I was just like “right…” So then I got back to my fiance dilemma and I had to pick one of the crazy people to marry because I knew I was getting married on September 23rd but I couldn’t decide who I was marrying. All of a sudden I remembered about Shaun and I got all excited because I didn’t have to marry one of those weirdos, I could marry the man I was in love with. Then I woke up. That was one crazy dream… I mean, George Bush? Ha!”

I can’t… I just… HAHAHA!! Shaun’s favorite part is the fact that I thought George Bush was the weirdest thing about that dream. (He’s right, that part is pretty fantastic.)

Reading this dream has inspired me to go through all of my old journals and copy any and all documented dreams into one notebook. Because I’ve had some pretty CRAZY dreams, let me tell you. When we first got married I remember one morning telling Shaun all about my dream, and when I was finished he had this bewildered look on his face and said “Remind me to grab a video camera the next time you say you want to tell me about a dream you had.”

PS. Aren’t those monsters cute? I snagged them from here.